I dreamt all adrift in the warm/cool shade,
Softly relaxed in an afternoon haze,
My backyard transformed, now a shining glade,
Where wind shadows caught my wondering gaze.
The breeze tickled leaves and tossed limbs around,
As it capered and cavorted in glee,
It's soft susuration the only sound,
Except for the hum of a bumblebee.
The sky sang a deep, rich, blue melody,
As the earth roared harmony, velvet green.
Bright clouds led a daring counterpoint, free
To join the green choral polyphony.
Blue sky melody and green harmony,
Blessed my eyes in visual symphony.


When summer finally arrived in the Keweenaw, I had to spend a few hours dreaming in the shade of our porch swing...at least when the bugs allowed it. 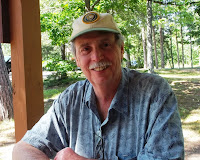 I dreamt that I walked far beneath the earth,
And wandered caverns enormously old,
Through cracks that would barely permit my girth,
Surrounded by shadows silent and cold.
I felt the weight of the rocks overhead,
And touched the face of the gathering gloom.
Yet, although the earth is home for the dead,
I did not succumb to fear of the tomb.
I met myself in a saturnine shade,
Waiting for me in soundless composure.
He showed me the fog of fear I had made,
And brought me peace with whispered disclosure:
A clear mind tears deception asunder,
And a quiet conscience sleeps in thunder.


I read an Old English proverb late last night before I retired. Somehow, it insinuated itself into my dreams. The proverb says: "A quiet conscience sleeps in thunder." How it got from there to wandering caverns deep and dark and cold, I haven't the foggiest...

Jehovah was sitting alone in the dark,
And He was so bored He could cry.
So He snapped His fingers, creating a spark,
Which floated before one great eye.
Because He'd created the very first light,
He thought to Himself, "Goodness Me!"
And channeled a tiny bit more of His might,
To make something else He could see.

He pondered the various ways to create,
Though certain He'd not do it wrong.
When writing upon on a completely clean slate,
One always should start with a song!
And so the Almighty threw back His great head,
Unleashing His titanic voice;
The powerful note that He first sounded led,
To the making of His first choice:

A beautiful creature, on gossamer wings,
Now hovered in front of His face.
He smiled to Himself when He heard how it sings,
As it floated out there in space.
His smile faded fast, as He listened with care,
To its now melancholy song;
And He knew that to leave it alone out there,
Would cause pain, and that would be wrong.

So He laughed and He sang another great note --
He sang a most wonderful song.
The first of the grand compositions He wrote:
Angels - a hundred thousand strong!
Then, a hundred thousand new voices now sang,
With a spirit He had set free,
And the universe He'd created, now rang
With a glorious harmony.

The music, which started a long time ago,
Grows more beautiful with each day;
And the sons and daughters of Adam will know,
Their part in the great roundelay.
The stars and the planets all beat with His heart,
And the universe wants to swing.
All creation works hard, to perform its part
With the Lord, who just loves to sing!

I wrote this back in 2006 and sort of tripped over it this morning. I wasn't sharing my poetry widely back then, so after all that has happened in the last three years, it sang to me. I was up very late (or early) writing the first draft of this unpretentious little poem. I'm not certain what I was thinking -- writing a creation story. But here is my somewhat simple take on how, maybe just perhaps, the universe began -- not with a great big bang -- but with a spark and a song...

The foggy arms of morning caress me,
When first I venture outside my front door.
Vague glowing shadows of trees address me,
With wind-driven whispers across the moor.
The slowly retreating chill of the night,
Whose slender fingers grasp tenuously
At my face and hands, retreat at the bite
Of dawn's first rays seeking sinuously.
A touch of sun sets the ether aglow,
With brilliant warning of doom for the dew,
And pretty promise to warm my chateau --
To lift up my heart, and my strength renew.
Silent, I stand,  to let my spirit pray,
And give thanks for my life at break of day.


I love greeting the sun on a cool and foggy Copper Country morning. Everything glows with the promise of the approaching day, as the land wakes from the misty shadows of night.