I'd go out walking after dark,
And never once feel insecure.
I imagined a great snow shark,
Made my safety a sinecure.
I'd stride as if I owned the road,
Just taking my shark for a walk;
Invisible -- it never showed --
While hiding that twas all a crock.

Although the shark remained unknown,
I knew its aspect could cause dread;
My guardian was wholly grown,
To roam dark places in my head.
I learned that bullies would think twice,
If I'd pretend I had a guard:
Impervious to snow and ice,
Invisible, but strong and hard.

These were skills that I had to hone;
It doesn't work if you're lazy.
But bullies may leave you alone,
If you're a basket of crazy.


Okay, I know this fantasy sounds a bit crazy, but there is a kernel of truth. I found that bullies in school would leave me alone, if I acted as if I had nothing to fear. After a while, they were no longer scary and dangerous, just annoying and dangerous (like heavy traffic or thunderstorms). 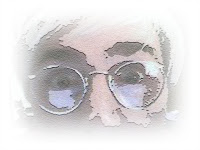 A thought intruded, suddenly,
While gathering wool, sipping tea,
And gazing inward, I could see
I wasn't me, entirely.

A river red and blue, it flows,
From top of head to tips of toes.
Yet ev'rywhere the river goes,
Its misbehavior often shows.

It knows a secret, wild and fey,
That makes it act in a strange way:
My life's blood, as blood tests betray,
Contains my brother's DNA.

I may not appear differently,
I look the same; I look like me.
Yet, me, myself, and I agree,
I'm not myself, entirely...


939 days since the blood and marrow transplant, and I am still not used to the knowledge that, essentially, my brother's blood flows in my blood stream.

Today would have been my Mom's 83rd birthday. She died in May, 1990. I miss her everyday. This is the poem I wrote upon her death and read at her funeral:

I see in my reflection, clear,
The image of your face.
I glimpse your shadow, standing near,
In each familiar place.
Your perfume permeates the air,
When sudden, I take note,
And lingers long and gently there,
On letters that you wrote.
When injured, or when feeling sad,
I feel your soothing touch.
And smells of cooking make me glad
I loved your food so much.

Now, late at night, when silence reigns,
I hear your voice again.
I know that after tears and pains,
Your flame is gone - your warmth remains.