He seeped through the mists on All Hallows Eve,
A shadowy, homeless wraith on the wind:
His grasping arm, like a stick through his sleeve,
His jacket, draped on a hanger and pinned.

Though welcomed at homes with Halloween lights,
Where smiling folks said his costume was good;
He thanked them, then ate with ferocious bites.
They didn’t know he was starving for food.

He shuffled through town as fast as he could,
Stuffing his pockets and his shopping bag.
He ate more candy than he knew he should;
Often chewing so fast, he’d almost gag.

An hour later, collapsed in a yard,
The ghost of a child, small and pathetic;
Lay moaning, shivering, breathing hard,
Full of candy now, and diabetic.

He writhed on the ground, and cried to the night,
His stomach now full of delicious treats:
Why must he suffer sharp pain and fierce fright,
And be left alone on the city streets?

He was drifting now, riding waves of pain,
When he felt a hand softly stroke his hair.
A voice said he’d never feel pain again,
And instantly, he was no longer there.

A smiling old man in odd looking clothes,
Was singing a song about life and death,
About secrets of life nobody knows,
Without stopping, even to take a breath.

He took the man’s hand and stepped through a door,
Where he met his mother, he knew had died;
Looked back at the shell, where he lived no more,
And for a second, he silently cried.

The Minstrel stepped back and he sealed the door.
He knelt by the body so still and mild,
Then he sang a prayer for the homeless poor,
And the tragedy of a starving child.

Then he prayed that this sight would do its part,
When viewed in the glare of the morning sun,
To change even one indifferent heart.
Then took out his phone, and dialed 9-1-1.


Not all that is sweet is good for you, and costumes often conceal dark truths.

Now warm within the confines of my home,
I shiver at the long remembered chill
Of wind, which stirred my backyard sea of brome;
Which touched my beating heart, and always will.

I stood my watch upon my deck, adrift
Amid the shifting swirls of midnight mists.
Dim moonlight touched my face, a silver gift,
Awakening a dream that yet persists.

Upright and tall, the master at the rail,
And captain of my stationary ship,
I navigated, certain we would sail,
Until we silently docked in our slip,

The flexing of the deck beneath my feet,
The snapping of the silver sheets aloft,
The thrumming of the lines made my heart beat,
As counterpoint to sighing breezes soft.

A street lamp, now a gleaming barbican;
Whose tower watch, alerted by my sails,
Sounded a horn -- from misty minivan,
Unraveling the threads of dreamy tales...

I summoned Dante back up on the deck,
And slowly I unhooked his cable tie.
I turned back once, to ponder and reflect
On reverie, and sadly said goodbye.

Now warm within the confines of my home,
I shiver at the long remembered thrill,
Of voyages, where dreams let the heart roam,
Where old souls sail away, and always will.

On one recent evening, as I trod the boards of our deck, surrounded by thick fog and faint moonlight while Dante completed his late night duties, I was carried away upon a sea of imagination. Captain of my fate and master of the deck, I navigated toward a distant light on a fortified seawall...until a minivan honked on the next street, breaking the spell…

The gurney was narrow as a park bench;
It rattled and shook with bumps on his drive.
One nasty pothole gave his back a wrench,
But served to remind him he was alive.

His eyes were dazzled by ambulance lights,
As EMT's lifted him in the back
Of a van, full of beeping, blinking sights;
Counterpoints to the night’s velvety black.

An hour before, he was watching TV,
Silently slouched on this favorite couch.
Mouth full of popcorn, a glass on his knee,
He sprawled and he growled, the consummate grouch.

He cursed all the challenges of his life,
He blamed his whole family, one and all.
He even cursed his long-suffering wife --
A curmudgeon with a clarion call.

Family members ignored him, of course.
So tired of years of verbal abuse,
Delivered full volume, without remorse,
They despaired of ever reaching a truce.

Tonight was definitely different,
A change in the weather brought them around.
The storm in the living room went silent,
Except for whimpers and a choking sound.

His popcorn was scattered everywhere,
He was on the floor and was turning blue.
They entered the room, and they just stood there,
And watched, like they didn’t know what to do.

The youngest finally dialed 9-1-1,
Though he hesitated uncertainly.
As the others’ composure came undone,
They all began calling, frantically.

Time seemed to stop in a flash of green light,
A shadow lifted him off of the floor,
And his dying eyes saw the strangest sight,
A man dressed like no one he’d seen before.

The song the man sang seemed to clear his throat,
And air rushed in, once again he could breathe!
But he was an ornery, vile, old goat,
His temper returned, he began to seethe...

As the Minstrel’s song held his bile in check,
He saw himself through his family’s eyes;
He saw his fury make their lives a wreck,
A monster that they could only despise.

His two little children, his loving wife,
Long time targets of his tantrums and ire;
Had all hesitated to save his life,
So frightened of him, they’d let him expire.

They’d looked relieved as men took him away.
If he could have breathed better, he’d have cried,
As the anger he fed everyday,
Was lost to great sadness and quickly died.

The Minstrel, like always, had disappeared,
But his song long haunted the old man’s mind.
His family came back, though he had feared,
They’d leave him for someone loving and kind.

He learned to enjoy eating humble pie,
For the next time, they might just let him die!

Take care to sweeten your words when you share them with your loved ones. Someday, you might have to eat them.

I dread my dreams in the dead of the night,
And impossible stories they relate.
They exceed the limits of wrong and right,
And they go where they will, with no debate.

In images, bright and spectacular,
Movies in high definition unfold;
With characters speaking vernacular,
Who can’t see that I’m both grizzled and old.

In my dreams, my mind is fully intact;
My memories are completely restored.
In an instant, I can find any fact;
My brain is so quick, I never get bored.

My reverie self is both strong and quick,
I run like a rocket propelled gazelle.
I never get hurt; I never get sick;
And have a phenomenal sense of smell.

Inherited indestructible health,
Grants a legacy of long life from birth.
With a source of inexhaustible wealth,
My dream self travels all over the Earth.

My dream adventures are wild and carefree.
Well, they are, most of the time anyway.
But, things do go wrong occasionally,
Yet my nightmare self somehow wins the day.

Though all dreams must fade with the end of night,
Remembering the excitement and fun;
The domestic chimera must now fight,
His mundane, real battles under the sun.

Sometimes, waking up is the hardest thing I will do all day. 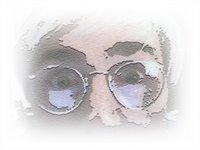 The teardrops falling from his pale blue eyes,
Leave lingering streaks down his dusky cheeks;
An echo of those falling from gray skies,
In autumn's depression, lasting for weeks.

Languishing in his midnight brown study,
Pouring over old, faded photographs,
Revisiting each, his fingers muddy
From trying to resurrect epitaphs.

Once vivid memories, starting to fade,
Dance in the shadows of his hazy past.
Those memories were so lovingly made,
It crushes his soul that they could not last.

He cries in the twilight of brilliant mind,
Lost in a fading fog of reverie.
Bright images he can no longer find,
Flicker like stars through night clouds, distantly.

A flame, solitaire, with a bright green hue,
Pierces his fog like a beacon at night.
He freezes, not knowing what he should do;
A deer, watching an emerald headlight.

A voice near as powerful as the sun,
Chases the mists of confusion away,
And he sees all his days, every one
Clearly remembered, as though yesterday.

This taste of Grace gives his spirit a lift,
Though he knows in his heart it can not last.
He thanks the Minstrel for his precious gift,
One he knows, even now, is fading fast.

His family will never understand,
A change that comes over him suddenly:
Why the man of dementia looks so grand,
While losing so much of his memory.

An island of recall in a sea of shadowy mists is a joy that warms the soul.

I wake each day and start my life anew,
And graze as one new-risen from the dead;
To gather all the clothing that I threw,
Upon the furniture around my bed.
My vision’s not as focused as it seems,
I grope for things as if my eyes were blind.
My mind has yet to leave the path of dreams,
Still reticent to leave that world behind.
Shaking head and hands and groaning loudly,
I struggle to achieve my waking state.
Somehow on my feet, I’m standing proudly,
Then see my watch and realize I’m late!
I let it pass, and choose a path sublime:
Remain a lost speck in the eye of time.

Sometimes, it’s just better to go with the flow.