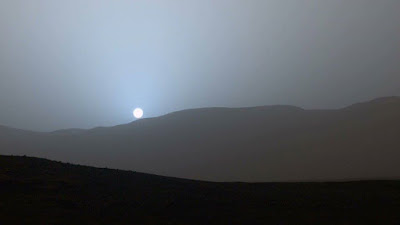 Though distant eyes may capture other light,
And gaze at wonders human eyes can’t see,
Such images bestir an inner sight,
And ferry mind and soul across a sea
Of stars and darkness deep beyond belief.
To cast ashore a trav'ler on red sand:
A pilgrim bravely home on Heaven’s reef,
A breathless, lonely soul upon that strand.
The sun alone ties intellect to home --
A smaller, cooler, distant signal pyre,
To warm a restless spirit drawn to roam,
With memories of basking in its fire.
And though the soil is dusty red in hue,
The sunset is an alien grey blue.

When I saw the color image of the sun setting on Mars, the blue and grey light had an alien feel I could not shake. It was thrilling and frightening all at once.

My forever chore seems forevermore
A dreary drudge and myopic topic;
A dead awful bore and a chalky chore,
Yet, it’s full of life submicroscopic.
Flecks that cling to clothes, tiny, arenose;
I see them riding on bright shafts of light --
I brush from my nose, breathe them, I suppose,
So cleaning is a never-ending fight.
Once sure that this soup, full of microbe poop,
Sports bacteria and their viral kin;
I had to regroup when I got the scoop:
That my home dust is mostly cast-off skin.
I’ll never be free of dusting, you see:
The tiny particles are mostly me.

When closing up the house for Winter, one becomes more aware of the motes in the air.

Young voices cut swiftly through stinging air;
Icy rain-slicked grass made running a chore.
November clouds scudded everywhere,
And grey Autumn sky turned playground to moor.
The principal’s call cut through all the row:
His loud voice commanded we come inside!
Of course, we complained -- why must it be now?
But his visage spoke volumes he couldn’t hide.
We saw, one and all, the tears in his eyes.
Our river of silence flowed through the door.
That the TV was on was a surprise;
We watched Cronkite cry, and sat on the floor...
A roomful of childhoods were suspended,
The afternoon that Camelot ended.

Some memories are burned, bas-relief, on the walls of my mind.

T'was the strangest sight in the dark of night,
An old man crouched in his chair;
His skin glowered grey, or was lit that way,
By the flat screen shining there.
His eyes, mouth, and nose -- a serious pose,
Were still and easy to see.
Did a thought bequeath -- that he didn't breathe?
At least, so it seemed to me.

But he was not ill, though he sat quite still,
His attention was transfixed.
My greatest surprise were tears in his eyes,
Moans and whispers, intermixed.
"My life has been long, a living love song."
He crooned in a husky voice,
"He launched an attack, and I attacked back;
I felt like I had no choice!"

He talked for a while in a breathless style,
About adapting to change.
"I'd always adjust -- I knew that I must,
But social media's strange.
The spirit's akin to striving to win,
Even though there is no race."
He said: "There can be no civility,
And no one can see your face."

"Many posts are jokes or indirect pokes
In the eye of friend or foe.
And much of the stuff is fake news or fluff --
F-bombs -- wherever I go!"
He said that he missed correspondence, kissed
With a touch of writer's tools;
And though there are posts graced by writers' ghosts,
Many spring from flatulent fools.

He sits there at night, in the screen's blue light,
And ponders how to proceed.
His gentle old soul and singular goal,
Focused on planting a seed,
That will grow to be a family tree,
To which we all can belong;
To open a gate, to flush out the hate,
And be a living love song.

There is treasure in the measured response of well-reasoned correspondence. In this day of rapid retorts and sound bytes, I often miss the pleasure of the treasure in civil discourse and well-written prose.

A Visit from Lord Dampnut

by Maudit Cybercurmudgeon (a personal parody)
(with apologies to: Clement Clarke Moore - 1779-1863)

'Twas just before Christmas, when all through the Net,
Spread stories of tax breaks and riches -- and yet;
Our cupboards were empty, our carpet threadbare,
Our stockings were darned with our daughter's hair,
The children were hidden, all under their beds,
While nightmares of cages danced in their heads;
And mamma slept fitfully, her head on my lap,
As I kept a watch for ICE and their crap,
When out on the street there arose such a clatter,
I sprang from the bed to see what was the matter.
Away to the window I flew like The Flash,
Peeked through the shutters... and threw up my hash.
The lights on the slush and the dirty snow,
Gave a lustre of sludge to black jackets below,
When, what to my terrified eyes should appear,
But a black limousine, and ICE men drinking beer,
With a lumbering passenger, pallid and thick,
I knew it was Lord Dampnut, that old prick.
More vapid than beagles his sycophants came,
And he bristled, and pouted, and called them all names;
"Now, Smasher! now, Trasher! now, Masher all reavin'!
On, Vomit! on, Stupid! on, Rudy and Stephen!
Now tear off the porch! Now knock down the wall!
Now trash away! mash away! smash away all!"
As dry heaves before the wild hangover scry,
When they meet with a locked door, they blow right by;
So up to our door the invaders flew,
With AR 15s, and Lord Dampnut too.
And then, in a twinkling, I heard in the halls --
The crashing and smashing of windows and walls.
As I drew in my head, and was turning around,
In my bedroom Lord Dampnut oozed with no sound.
He dressed all in wrinkles, with long, red ties,
And his clothes were all stained by ketchup and fries;
A bucket of chicken was strapped on his back,
And he reached for a drumstick from his greasy pack.
His eyes—how they squinted! his pimples—how scary!
His cheeks were like pork chops, his nose—a blueberry!
His droll little mouth was chomping chicken,
And the beard of his chin looked mangy and stricken;
The bone of a leg he held tight in his teeth,
And the grease it encircled his chin like a wreath;
He had an orange face and a protruding belly,
That shook when he walked, like a bowl of brown jelly.
He was chubby and plump, a malignant old elf,
He'd farted and smelled like he'd soiled himself.
A wink of his eye and a twist of his head,
Soon gave me to know I had plenty to dread;
He spoke just a word, they went straight to their work,
And stole all our stockings and money, the jerk!
And sticking a finger inside of his nose,
He left, like sewage down the hill flows.
He schlumped to his car, to his team gave the bird,
And away they all drove like a thundering herd;
But I heard him complain, ‘ere they drove out of sight,
"Say a word and we'll come back...tomorrow night.

My tea steamed billows in frosty night air,
On its surface, the moon and stars adrift.
I lingered, as the silence held me there,
Awed and bewitched by this gentle gift.
A chill Autumn breeze stirred the ghostly steam,
And whispered its wisdom in voice so soft,
I felt as though I was caught in a dream.
My spirit burst free and drifted aloft.
A fleeting image flashed clear in my mind,
I swear it was me...standing far below:
A balding old fellow, seen from behind,
Gazing in his cup, standing in the snow.
Now, you may wonder what else I can see,
Holding my cup, gazing into my tea.

I expected a lift from a cup of hot tea, but this was “uplifting.”