I am not certain what I expected when I signed up to substitute teach. Oh, I knew that it is not really "teaching" by official rules — in Michigan, that requires certification and credentials that I (unfortunately) do not have. However, my general expectations were designed about a self-constructed classroom image, based on my days as a student, my time spent teaching at university, and my years as a trainer and lecturer. I generally expected NOT to be a welcome sight to the students. I expected uncertainty and something of a let-down on the part of the students.

I had not planned on my new role as "fresh meat."

I remembered wanting to learn in school...a distant memory clouded by all the angst and relationship anxiety that permeated high school life...but I was certain I wanted to learn. I admit, I was unprepared for the malicious grins on so many faces and the feral light in some eyes. I wasn't there to teach, to discipline, or to babysit — I was the day's entertainment — a new puzzle to probe and solve. For a few moments, all was quiet on the western front. When I failed to break into song and dance, the testing began — and it was me being tested. When I failed to collapse or give in to outlandish requests (One does have to let them go to the loo, right?), but pursued the absent teacher's instructions to the letter; they began to shut down. Some participated and worked together (a bit louder than normal, but, hey I was a sub after all), but many just put a head on the desk and checked out. Some talked quietly, some sneaked food and drink when I was not looking, but many just "checked out," for the hour. I didn't want to be welcome, but I also didn't want to be superfluous.

Their eyes cheered when they saw my face,
And I marveled at their musical grace,
As they danced, seeking borders to cross -
And battlegrounds to scout and boss.
I heard the critical rustle and hush,
As things academic turned to mush;
Leaving each muse both gagged and blind,
And recess flagged in every mind.

I whithered at their gleeful stares,
And shuddered at the baleful glares,
Of those who quickly sensed fresh meat -
Already tasting the salty and sweet.
As aye, for each here was the rub...
This day we have a brand new sub!

A neophyte, I'd thought to find,
Behind each pair of eyes, a mind
Perhaps prepared to take a test -
An intellect charged and now at rest;
But coiled to spring, when on the nonce
It perceived ideas, to ensconce
Within a frame of lightning thought -
And logic's lattice swiftly wrought.

But as they hie from assigned seat,
And drive class order toward retreat,
And seek to probe my armor's chinks,
I slowly see what each one thinks -
And distressed, I comprehend
That learning has come to an end,
And testing of our wills holds sway -
At least, on this, a subbing day.

As class disruptors crash and burn,
I feel for those who want to learn;
But culturally powerless,
They watch, as with each little mess
The unrepentant terrorists,
Slash their academic wrists,
And practice, in their childish way,
To waste another precious day.

Once they learn they cannot go,
And rules, unchanged, they must follow;
Their energy seems to deplete -
They sink into their assigned seat.
Their eager eyes grow guarded, veiled,
And thoughts once free are swiftly jailed.
Those who planned their thoughts to vent,
Are silent now, and reticent.

It's fortunate that, (at least to some)
I didn't want to be welcome. 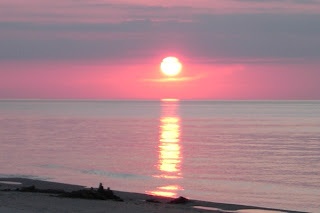 It is my deepest wish that folks who look through the lens of opportunity aim that lens at Michigan’s Upper Peninsula.

Born in Detroit, I have lived in the Western U.P. since 1967 — a long love story with a place that still echoes in many ways what the world was like when it was new and unspoiled. Age 59 and once again out of work due to economics, I still have hope that the secret treasures of Michigan and especially the U.P. will be discovered.

In that vein, I offer the following, which streamed from my virtual pen this morning as part of my daily exercises in keeping a positive attitude.

You want bright blue waters to see -
Clean beaches to run safe and free?
You want a place your kids can thrive -
To celebrate that you’re alive?
You want great country, sweet and green -
With vistas like you’ve never seen?
You want vast forests, strong and tall -
With resources enough for all?
You want great people, friendly, fair -
And oceans of clean sparkling air?
Don’t say you can’t find these things, man -
Say, “Yes I can…in Michigan!”

And please, don’t stop with just the mitt -
Don’t think that’s the extent of it.
Look up to find the things I saw -
Beyond the straits of Mackinaw.
Beyond the Mighty Mac you’ll find
A treasure of the richest kind:
Untapped riches wait your sight -
Often dressed in winter white,
Or in summer’s velvet green,
With deepest blue you’ve ever seen!
The friendly folk who fill that place,
Are blessed with heart and health and grace.
Come find these things, you know you can…
Come UP to Upper Michigan! 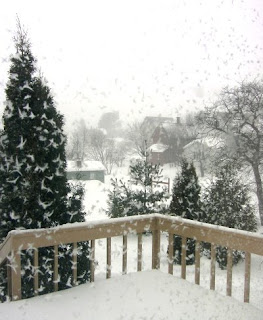 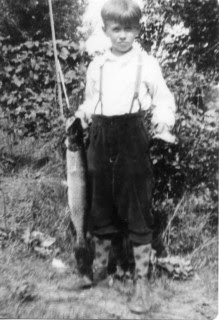 I'm wrestling with ghosts at the moment...the voice of my Dad, actually — constantly in my head, reminding me that I have a single, overriding obligation: to support my family. That there is a sacred trust that comes with marriage and kids, and failure is NOT an option. It's a Celtic thing. I've never filed for unemployment benefits before and it feels like...failure.

My wife and I have four grown children, and like most parents I have met, I feel certain that they never listened to a single word of advice we uttered. Children seem bent on making their own mistakes and learning everything the hard way. Yet, even at 59 years and growing, I can still hear the voices of my Dad and my Mom, and I take some hope in that.

My father (the dedicated fisherman pictured here) was a strong and stern man. He was a bit scary until you got to know him. Even his closest friends told me that they were initially put off by his gruff facade. There was a reason his grandchildren called him "Grumpy" instead of Grandpa. He was the poster boy for stoicism and could best be described as a Celtic Stump. A more stubborn man never existed. (Although, my wife has put me up for candidacy.) The reflection below describes my most recent encounters with the ghost of a man I loved and respected.

I always thought my thoughts were mine alone,
That none intruded, save I gave them pass;
The space inside my head was mine to own -
Lest ideas unwanted might trespass.
Yet when I journey inward, pondering
Travails and joys that populate my days,
I find there is no path, to sundering
My journey from my father's Celtic ways.

At ev'ry twist and turn I hear his voice,
Declaiming my responsibilities;
Reminding me I simply have no choice,
Except to shoulder my sacred duties.

He told me that a man is just a man,
No better than another on the Earth,
Though some try to convince you, if they can,
That they are better, by station or birth.
He said if I accept that, I am lost -
And therefore I should be prepared to fight,
To stand up for my own, at any cost -
For God alone could claim my soul, by right.

He told me that, one day I'd share my soul:
A joining that would meld two souls as one,
A nucleus from which a union whole,
A family, my own, would be begun.
Though patriarch and father I would be,
Respect and love are earned, not my birthright;
And so, it is incumbent upon me,
To stand up for my own...and win each fight.
Yet, should I lose a battle — one or two,
Through treachery or chance, I fail to win -
To not get up and find something to do —
To not find work — there is no greater sin.

Though he has passed, his strident thoughts remain,
To haunt my dreams and touch each waking hour.
My father's song is gone, yet its refrain
Seems never to decrease in strength and power;
Thus forcing me to make the only choice:
To find a way this battle can be won,
And in that battle find my own strong voice.
And so, I seems, I am my father's son.