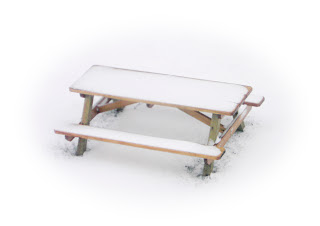 Maybe it explains why I tend to gain weight in the winter. I looked out my window and groaned - white here, white there, white, white everywhere! The first snow of the season touches that tiny fear of winter's cold breath searching out every crack in my house and turning my floors into icy paths for bare morning feet. It is the season of the long, cold sleep and longer, colder, darker -- seemingly endless nights.

But for some reason, it also stirs images of frosted cakes and gingerbread houses covered in white icing, whipped cream drifts, and soft powdered sugar. Who would have thought Jack Frost had a sweet-tooth?