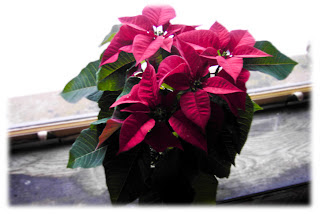 Some call them pretty poison and others just the Christmas flower. An urban legend tells of a two-year old child dying in agony after eating a single Poinsettia leaf. There are also tales of its status as a death blossom for pets and other animals. In truth, it's not really good for you, and can make you very ill if you have an allergy to latex, but it is not deadly poison. They grow wild in the tropical forests of Mexico, and like so many people I know, who live in the Upper Peninsula of Michigan, they don't do well when the temperature drops below 50 degrees...

According to legend, a little Mexican girl called Pepita assembled a bouquet of common roadside weeds and offered them at her church's nativity scene, because she had been told that even the most humble gift, given in love, is acceptable in God's eyes. When she placed the weed bouquet at the foot of the nativity scene, it instantly blossomed into brilliant red flowers. The astonished witnesses called them Flores de Noche Buena, or Flowers of the Holy Night. The were Poinsettias, the most popular Christmas flower, sometimes known as the Winter Rose...

Although the Aztecs called it purity,
A symbol that the ancients highly prized,
The rumor of its great toxicity
Has grown through time, and lingers super-sized.
And yet, unless you have an allergy,
It's safe to eat a leaf, not that you should -
For though it might just upset your tummy,
I've heard that it does not taste very good!
The legend says a child, humble and poor,
Picked weeds to bring to church on Christmas Eve.
They blossomed when she brought them through the door:
A Christmas miracle, they all believe.
A wild Poinsettia was what she chose,
The Christmas Star, the velvet Winter Rose.