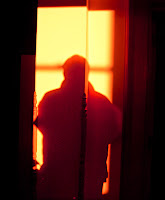 I wonder how normal it is to feel as if you're fading away? I know how it is to feel invisible. I've been to gatherings and parties where I don't fit in, where I feel like a hole in the air - only noticeable when someone tries to walk through me. Ever leave a gathering and have no one notice you've gone? Fortunately, it is a rare occurrence (at least in my life) and it happens about as often as those rare times that I have been the center of attention. During those invisible times, when I have faded from view, I think of myself as a gray man.

As I've grown older, I've noticed that I can choose to become a gray man, simply by distancing myself from everything. As I begin to not feel, I also begin to fade - as the bright dawn dies into a gray winter's day. I blamed everyone else for not paying attention to me, and yet the truth was much more under my control. I faded from their view because I chose not to be affected by others and the life going on around them. It is a dangerous choice, for one can choose to become too gray, and simply fade away...

Am I the gray man when the death of dawn,
Moves me no more than a chess pawn?
It matters not if I am gone.
If I am gone?
I'm gone...